Many ballplayers dream of playing pro baseball one day in front of thousands of fans, but in reality, less than 11% of NCAA baseball players will be drafted and the odds are even smaller for high school players (Rosenbaum). This is why major league debuts are a huge deal for many players and their families. It’s the day where they can see how far their hard work over the years has taken them.

I was lucky enough to be a part of this special moment for Padres RHP Chris Paddack. Now, I do not personally know Paddack, but I have been following along on his minor league journey since the Padres acquired him from the Marlins in 2016. Unfortunately, he had to undergo Tommy John surgery in August 2016, which caused him to be out for 22 months (Sanders).

After rehabbing with Class A Lake Elsinore Storm last season, Paddack was invited to his first Padres Spring Training camp for the 2019 season. Considering this was his first time facing Major League hitters, he drew a lot of attention by putting up some amazing stats (2.13 ERA, 1.18 WHIP, 37 percent strikeout rate) and leading the Arizona Cactus League in strikeouts. His goal throughout spring training, like many others, was to make the starting rotation for the Padres. In his final game of Spring Training, Padres manager Andy Green gave him the good news. You can see Paddack’s reaction in this video.

Chris Paddack made his Major League debut March 31, 2019. Like I mentioned earlier, I was lucky enough to be a part of this special day. I knew this was going to be a big day, so I made a poster with Paddack’s roster photo and the words “in the mullet we trust”

My friend Kara, who is an SF Giants fan, drove down from LA to watch the game with me. As we’re walking through the member gate to enter the ballpark, I hear “Nice sign! Can we take a picture with you? We’re Chris Paddack’s family!” I was in complete shock. We all took pictures and I sent them to his aunt.

We parted ways and Kara and I continued on to the Fox Sports San Diego set. At the set, we ended up seeing Paddack’s brother, Michael. He complimented my sign as he was leaving the set. It was at that moment Kara and I decided we needed to abandon our seats up in section 300 and sit with his family.

It wasn’t very hard to find his family down by the first baseline because there were about 40 of them and most were wearing cowboy hats since they are from Texas. We waited until the usher wasn’t looking and snuck down into section 115 by first base. His family was delighted to see us and our huge poster.

Chris Paddack had a stellar start to kick off his major league career with 2 hits, 1 run, 1 walk, and 7 strikeouts through 5 innings!

After they switched the pitcher, Kara and I started socializing with the friends and family. Most of our conversations were with his two friends from high school, Jake Pokorney and Shawn Spradling, as well as Paddack’s cousin, Aaron, and high school baseball coach, Connie Cochran. They were very welcoming and had tons of great things to say about Paddack. It was very cool to see how excited and supportive everyone was.

Throughout the game, I was receiving messages from friends saying that they saw me and my poster on the Fox Sports San Diego broadcast on TV. In the middle of the 8th inning, after Padres Karaoke, I continued waving around my poster, which landed our group a cameo on the video board in left field. Coach Cochran was very excited to have been on the screen.

After the Padres beat the Giants 3-1, the family went to find Paddack to congratulate him on his debut. As his mom passed by me, I congratulated her on her son’s success and asked if we could possibly join them when they went to meet him in the dugout. She nodded yes and motioned for us to follow along.

Next thing we know, Kara and I are walking with his friends and coach at the back of the line onto the field and into the dugout. When it was my turn to see Paddack, I held out the poster and said “Hi, I know you don’t know me, but I was so excited for your debut I made this sign and your family let me tag along. You did an amazing job out there today! Congratulations!” He chuckled, said thank you and gave me a hug. We took a picture and then Kara jumped in for a picture as well. 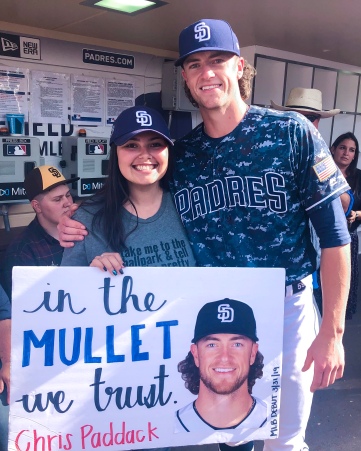 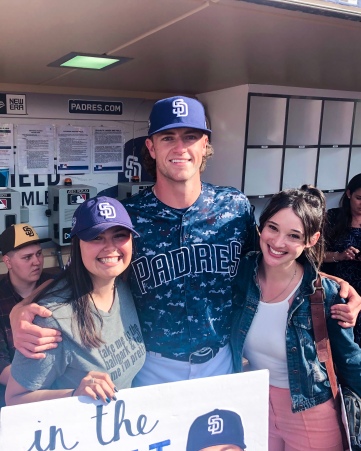 After that, Paddack and his family all started moving onto the field to take some pictures. Kara and I said our goodbyes to our new friends and exited the field to let the family have their special moment.

Kara and I walked away reflecting on what just happened and when we got to the concourse, we stood there in disbelief. It was a once in a lifetime opportunity that we happened to manifest into existence.